The Home for Unwanted Girls by Joanna Goodman 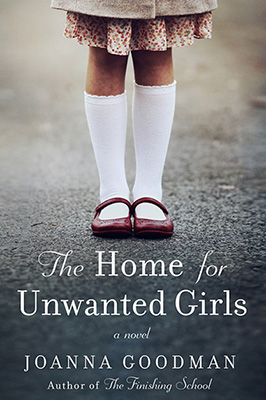 is a stirring historical novel that delves into 1950’s practices for dealing with unwed mothers, orphans, and adoption. Through the eyes of the characters, this moving book brings to life the effects of these illicit practices which, unfortunately, still exist in some communities even today. It also provides insights into adoption-related emotions and questions we encounter every day in our clinical work here at BPAR.

The story is about a teenage girl named Maggie who lives in the farmlands of Canada and helps out at her father’s seed store. Like her father, Maggie has a passion for rare plants and seeds. Customers from all over Canada flock to their small town store to buy the common and unique seeds they supply as well as tap into her father’s expertise on plant life .

Maggie lives with her parents and siblings. Her mother is French Canadian, and her father sternly runs the household with the understanding that the English are superior to the French Canadians. Her father fell in love with Maggie’s mother and although they constantly argue, her mother states that they have always shared a lust for one another.

The children attend English speaking schools, and education is important to Maggie’s father. At 15, Maggie falls in love with a neighbor, a French Canadian named Gabriel. He is a parentless young man from a poor farming family who is being raised by his older sister. Upon learning of their romantic involvement,  Maggie’s father sends her away to an aunt and uncle’s home to discourage the love match from continuing. While at their home, Maggie discovers she is pregnant. Maggie’s parents insist that she stay at her relatives’ home during her secret pregnancy and force her to place the baby for adoption.  Gabriel does not know of the pregnancy or the birth of their daughter, whom Maggie names Elodie.

Elodie, born prematurely, was to be adopted by a family from the United States. This purported adoption was set up by a corrupt private attorney who makes a living from buying and selling infants.  Sadly, this adoption never materializes, and Elodie is placed in an orphanage at a nearby foundling home with the hope of being adopted at a later time. A nun named Tata becomes Maggie’s caretaker, and they develop a strong and caring bond. But the other nuns tell Elodie that since she is so small and pale, she is unadoptable. The visitors want a healthy looking child.  When Elodie fantasizes that her mother will come back for her and take her home, she is told that this will never happen. The nuns tell her that she was born of sin and “scandal” and now no one wants her.  Their message and the feeling that even at a young age she already has a shameful past, leave Elodie confused and sad.

When Elodie is seven years old, she learns that the children in the foundling home are suddenly called “mental patients” instead of “orphans”.  School lessons immediately stop.  In fact, during the 1950’s in Quebec, all the orphanages run by the Catholic church were converted into psychiatric institutions because the Quebec government passed a law that paid the church $2.75 per day for a psychiatric patient and only $1.25 for an orphan.   20,000 orphans were  labeled and treated as mentally ill and subsequently became known as the Duplessis Orphans, named after the Canadian Premier at the time, Premier Maurice Duplessis. An article written by the Historical Novel Society notes that, due to this change, the Catholic Church was able to raise 70 million dollars in subsidies, and the Canadian government saved 37 million dollars per orphanage.  The book’s scenes that mark the severe abuse and neglect that Elodie and her fellow orphans experience in these institutions are heartbreaking and distressing to read.

The story continues with Maggie finding Gabriel  and telling him about Elodie. They never give up hope that they will find their daughter. Goodman’s writing speaks to the harsh truth of adoption practices in Canada during the 1950’s. The book delves into the illicit business of adoption and the many participants colluding with the  buying and selling of babies. Goodman educates the reader on how the government and the church were able to normalize this atrocity without any conscience.

The novel is beautifully written and allows the reader to see the views on adoption through the eyes of all who have been affected by it. The novel is unique in that it follows the birth mother and the child throughout their journeys.  We are given an inside view of the emotions that each grapple with as they struggle to understand the decisions that were made for them. The author poignantly interweaves historical truths as well as some of her own family history.

The sadness, the secrets and the lies are themes in the book that unfortunately are still seen today in some areas of adoption. For instance, it’s still true that the norms for unwed mothers in certain cultures strip them of their rights, force them out of their biological families, and shame them into permanent secrecy. One can only imagine the psychological impact on the birth mother throughout her life. She is on her own, literally and emotionally. She can’t discuss overpowering feelings of loss, rejection, or sadness.  She carries a stigma that she will never escape.

Even in cultures that openly acknowledge birth to unwed mothers and discuss adoption, many of the themes in this book resonate today. The words adults choose when talking to a child who was adopted or children in the foster care system carry tremendous weight in how the children view their own worth. The impact of the care that Elodie receives in her placements is poignantly demonstrated throughout the book. She longs to meet her birth mother, and she never gives up hope; however, she is indelibly scarred as she grows to adulthood without a consistent and loving caretaker.

BPAR is one of the few nonprofits that supports all sides of the adoption journey, providing specialized mental health care and resources to adoptees, birth parents, and adoptive parents. We also have a unique model for reuniting families in a safe and carefully planned way. Our mission goes beyond the clinical work in our Brookline office and extends to educating the public about these issues in the hope that someday, worldwide, everyone in the adoption triad will feel safe, supported and understood.

View all posts by Jennifer Eckert, LICSW →
Join Our Mailing List
Don't miss out on blog updates and new resources!