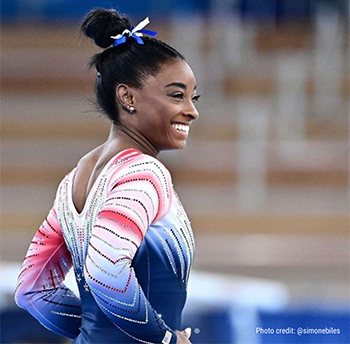 On November 22, 2015, Simone Biles captioned her 14 World Medals Instagram photo with this quote: “Work hard in silence, let your success be the noise.”(1) This blog is to honor the bravery and strength that Simone displayed six years later when she prioritized her mental health over another podium ceremony, making it bigger than gold.

Simone laid an incredible foundation for women’s gymnastics after competing in the 2016 Rio Olympics, but she made an even bigger impact on humanity this summer when she opened the world to the conversation of mental health for elite athletes in the 2020 Tokyo Olympics. Her success has created a powerful platform, and because of her decision to put her mental health before another gold medal, she started a conversation that has been discussed around the globe.

Simone’s beginning was far from gold, and her story has been a catalyst for adoption rights and advocacy. Her birth mother struggled to care for her, and she and her siblings ended up in foster care. She was later adopted by her grandparents, who provided the structure and love she needed to survive, thrive, and become the most decorated gymnast of all time.

When crediting her success, Simone often talks about her parents. Not every adoptee feels as connected to their adoptive parents as Simone and I do, but in our narratives about family, our “real parents” are our adoptive parents. They are the ones who raised us and provided us the tools to help us get where we are today. 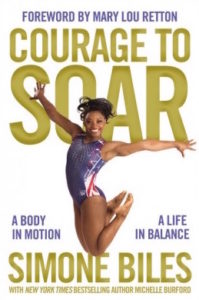 In 2016 a reporter refused to acknowledge Simone’s adoptive parents as her parents.(2) Rio was groundbreaking for the way the incident drew attention to inappropriate language around adoption and the idea of “real” parents. It also shed light on kinship adoption and brought the conversation to the forefront for people. Simone didn’t shy away from the conversation, and was incredibly resilient when the media questioned her family narrative. She went on to publicly support adoption and foster care organizations, and she wrote a book titled Courage to Soar, which BPAR reviewed when it was released in 2017.

Her story continues to inspire the world, and the Olympics continue to inspire young athletes who remind me of myself when I was young.

I didn’t grow up with a TV. We had a small monitor in the “office” which was a little shed on the side of our house. We used portable heaters and blankets for warmth when we wanted to watch a VHS on Saturday nights. We would make popcorn and nest in the blankets on the futon couch. I loved watching Air Bud, the original one where Buddy learned to play basketball. But this was as close as I got to watching the Olympics at home as a little kid.

Playing sports and baking were what defined me growing up, and although I didn’t grow up watching the Olympics, I knew how elite it was for an athlete to get to that stage. On my 9th birthday I had an Olympics-themed birthday party. My mom had little relay races and competitive games set up around the house for my friends and me. My favorite was the egg relay—we had to walk from one end of the room to the other with an egg balanced on a spoon we held in our mouths. My friends sounded as loud as the crowd at the Rio Olympics as they cheered me on, the kind of support that Simone and the other athletes at this year’s Summer Olympics didn’t get because of COVID. I was so determined to carry that egg and win the plastic gold medal my mom bought at the dollar store. But this was as close as I got to the feeling of competing in the Olympic Games.

Simone made it to the Olympics because of years of hard work in both gymnastics and her mental health journey. In an interview, Biles shared that she felt her adoption had set her up for a better route in life. “And I feel like I wouldn’t be where I am unless that turning point happened. I would still be Simone Biles, but probably not Simone Biles that everybody else knows, the world knows.”(2)

If you asked my nine-year-old self what I wanted to be when I grew up, I would have said “famous athlete or a baker.” But here I am today, a mental health counselor who specializes in working with adoptees and their families as they navigate the ups and downs of their adoption journeys. I am guiding my clients to do what Simone advocated for, and I have to believe that the benefits of putting your mental health first are as rewarding as winning gold at the Olympics.

Between being an adoptee, an Olympian, and a survivor of sexual abuse, Simone inspires me by the way she presents herself to the world. I don’t know what it’s like to be the GOAT in a sport on the world’s largest stage, but I do know what it feels like to be a person of color and an adoptee. It’s a journey, and I am so grateful to Simone for making the noise where it matters most. At the age of 24, Simone Biles has shattered more glass ceilings than I can count.

Thank you, Simone. Thank you for being an advocate, a lived experience, and the GOAT who goes beyond.

Posted in Adoption, Adult Adoptees, Mental Health, Self Care and tagged emotions, kinship adoption, support
← Shame and Adoption — A Guide to Parenting with EmpathyAdoption In the Media: The Unseen, Unrecognized Struggle of JuJu in “The Chair” TV Series →