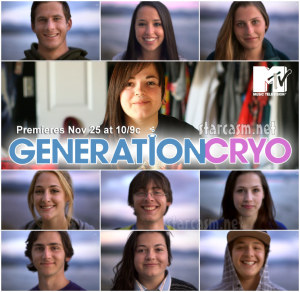 I have to admit, I don’t have the highest expectations of MTV. But when I recently came across the documentary Generation Cryo, I was blown away by their ability to capture such a deeply intense, complicated, and emotional experience in a natural and unproduced manner. Generation Cryo is a 6-episode documentary on MTV that follows Breeanna, a 17-year-old girl from Nevada who was conceived through sperm donation and raised by a lesbian couple. After Breeanna discovers that she has 15 half siblings, she sets out on a journey to find and meet them with the ultimate goal of finding the sperm donor.

Throughout the show, I was struck by Breeanna’s thoughtfulness and respect for each of her birth siblings’ opinions about whether or not they would want to meet their sperm donor. The documentary makes the idea of reunion a family discussion, helping the viewer to see how it impacts both child and parent. The viewer is quickly able to see how the idea of reunion can be upsetting for some and exciting or others. It highlights the sensitive topic of infertility and how painful it can be for adoptive parents.

As Breeanna meets her siblings, the viewer bears witness to the power of connection – the importance of knowing someone out there looks like you or has the same traits. Although she becomes closer to some siblings than others, Breeanna creates a relationship with each of them, helping them to unite and share their experiences. After being raised as an only child, Breeanna’s experience is beautiful to watch as she becomes so connected to her siblings.

The search process is complicated and emotional for all parties involved. Some of the siblings and parents are completely against it and others want to be actively involved. Although Breeanna sets out determined to find her sperm donor, she is not able to anticipate the emotional rollercoaster she rides throughout the process. Breeanna decides to send the sperm donor a letter and finds out after the fact that he does not want to be contacted. Breeanna is left with a barrage of emotions – rejection, disappointment, worry about ruining any potential for a relationship, and remorse for overstepping the boundaries of the relationship.

Eventually Breeanna does hear from her sperm donor who decides that he is willing to start to share some information with her. The show does a nice job in highlighting the importance of boundaries and pacing in reunions. Breeanna decides not to meet him right away and instead chooses to take things slowly.

Overall, Generation Cryo sheds lights on a perspective of adoption and conception that we don’t always see highlighted. The show is tastefully done and I would encourage any teenager dealing with a birth family reunion to watch it.