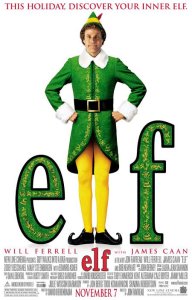 Watching Elf together as a family provides a wonderful opportunity to open up a discussion around adoption.  Elf is a playful adoption-themed movie, and it can ease some of the seriousness or anxiety around a subject that can be difficult or challenging for some kids and adults.

Elf, staring Will Farrell, is a Christmas movie about adoption and reunions. Buddy is a charming young adult elf who grows up on the North Pole.  As he gets older, he realizes he is different from the other elves and begins to question his identity.  Buddy discovers that he is adopted and, like many adoptees, he feels compelled to search for information about his birth family.  Sadly, Buddy learns that his birth mother has died.

Buddy decides to look for his birth father, Walter, who lives and works in New York City.  Once he arrives in Manhattan, Buddy is again faced with being different and not fitting in.  He wears his elf clothing and is mistaken for an actor working at a department store. We watch Buddy navigate two worlds as he concludes he doesn’t fit into either one.  This can be a common feeling among adoptees.

After a painful initial reunion with Walter, Buddy continues to pursue a relationship with him.  We watch Buddy struggle to connect to Walter and try his best to be the good son that Buddy imagines Walter wants.  After many miscommunications and awkward moments, Buddy is able to bond with Walter, Walters’s wife and their young son.

Buddy, through his unwavering belief and resiliency, discovers he has a family that truly wants and cares about him.

View all posts by Jennifer Eckert, LICSW →
Join Our Mailing List
Don't miss out on blog updates and new resources!