Note:
“We are deeply saddened and disturbed by the anti-Asian violence and hate that occurred this week. This is not a one-time event, and racism towards the Asian community has increased throughout the pandemic. At BPAR, we have the honor of working with many Asian adoptees, and we are dedicated to supporting and advocating for them. Our blog this week focuses on white privilege—an incredibly important concept that needs to be acknowledged. Exploring white privilege is a vital first step on the path toward anti-racism. We want our Asian community to be aware that we stand with you—please reach out to us if you need additional emotional support. — The Team at BPAR 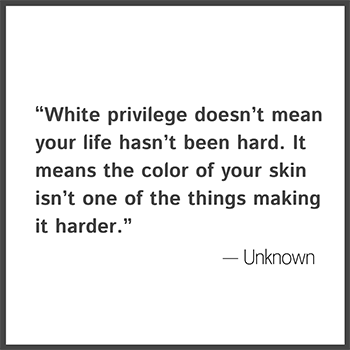 Racism. Race. White privilege. These words can bring up a lot of uncomfortable feelings for white people. Perhaps our own parents never talked about race or we were told misconceptions about people of color, or perhaps the topic of racism never came up in our education or life until more recently. In any case, I would like to extend an invitation to engage on the topic of having white skin, what it means, and how we can show up better for transracial adoptees of color, and in fact all people of color.

First of all, let’s talk about race—our race. Before we can talk about racism, we need to become familiar with our own identities. Often in our culture, race is a proxy term used to talk about racism or people of color. However, everyone has a race, and if you have white skin, like me, your race is white. Being white can easily go unnoticed, or it might feel like the default. This racial invisibility is addressed in Peggy McIntosh’s article, “White Privilege: Unpacking the Invisible Knapsack” (worth a read if you have a few minutes) McIntosh lists the ways in which her white privilege shows up in our society:

“When I am told about our national heritage or about ‘civilization,’ I am shown that people of my color made it what it is. . . .  I can easily buy posters, postcards, picture books, greeting cards, dolls, toys, and children’s magazines featuring people of my race. . . .  I can choose blemish cover or bandages in “flesh” color and have them more or less match my skin.”

These are just a few examples of situations where white people do not have to think about or consider their skin color. There are a couple of ways to start challenging this white anonymity. First, keep an eye out for whiteness, and name it. When you turn on the TV or go to the store, notice every white person you see, whether it is a real person or in an image. Also, consider when you tell a story, do you state the character’s race? What if the character is white? Rather than point out other races, point out whiteness. You may start to detect that whiteness is everywhere in our culture.

Second, if you are fortunate enough to know about your birth parents’ or grandparents’ lives, consider the history they lived through and how that may have benefited you. Were they allowed to vote for politicians before the Voting Rights Act of 1965? Were they allowed to go to a public school where their culture was accepted and welcomed, whereas up until the late 1970s, Native Americans were being sent to boarding schools? Were they always allowed to own land due to their whiteness?

Note: Sometimes the term Caucasian is used interchangeably with the term white; in fact though, Caucasian refers to a person from the Caucasus region, which includes Armenia, Azerbaijan, Georgia, and parts of Russia.

Racism still exists today, and it does not necessarily look the way we might imagine it. Well-known versions of racism include slavery, segregation, or not having the right to vote. However, racism shows up in many ways from microaggressions to institutional discrimination, and it may be overt (obvious) or covert (underhanded or hidden). Microaggressions are usually statements or behaviors that have subtle or unintentional undertones of discrimination. Institutional racism refers to larger systems of oppression, such as disproportionate numbers of black and brown people being sentenced to prison. As family members and friends of transracial adoptees, it is important to recognize and confront all forms of racism.

Identity development models have been created to understand the different stages of awareness when it comes to evolving our identity. There are distinct models for each individual identity. One particular model for the white racial identity includes the following five phases:

1.     Conformity: A white person does not recognize themselves as having race. They have a “colorblind” approach and believe racism lives only in the past (Ponterotto et al., 2006). A white person in this stage might say, “I don’t see color.” In families with transracial adoptees, white family members may deny or ignore that their loved one has a racial identity that impacts their life experiences.

2.     Dissonance: A white person sees or learns about an experience of racism. This contradicts their beliefs which can bring up “feelings of guilt, shame, depression or anger” (Ponterotto et al., 2006, p. 103). Now the person must decide whether to embrace the discomfort and evolve to stage three, or step back into the denial of the first stage. This experience could look like a transracial adoptee sharing their experience of racism with you, or perhaps, a transracial adoptee expressing that what someone (maybe you or me) said or did was racist. How do you respond?

3.     Resistance and Immersion: A white individual begins to understand the continuation of racism and how they have participated in that. They begin to unpack their own white privilege. They may feel angry at society for socializing them to participate in racism, or guilty for not being aware before. They may also overidentify with people of color (and reject whiteness), or try to be protective of minority groups (i.e. “the white savior”), or be overly enthusiastic about their non-white identities (i.e. claiming an ancestor way back was Native American, particularly without having any other connection to the Native American culture). In our culture, adoption often comes with the insensitive view that children are being “saved.” When you add transracial adoption to the mix, this saviorism becomes more complex and echoes the generations of white people who felt they had to “save” Native Americans and other people of color from their own culture by forcing the English language, Christianity, and other Western ways of being onto them.

4.     Introspection: White individuals in this stage continue to acknowledge that many different types of racism (structural, institutional, individual) are present in the U.S. and how they have benefited and contributed to it. They are “less motivated by guilt and defensiveness “ but may still experience “existential angst characterized by feelings of isolation, confusion, and loss” (Ponterotto et al., 2006, p.104-105). A white person in this stage realizes that they will never know what it’s like to be a person of color, or a transracial adoptee, and they recognize too that they might be cut off from their own ancestral history and culture.

5.     Integrative Awareness: Individuals in this stage “have a deep understanding of themselves as racial and cultural beings, are aware of racism socialization in society, value racial diversity in their personal lives, and fight multiple forms of oppression in society” (Ponterotto et al., 2006, p. 105). Not many white people are in this stage, but when they are, they are able to uphold their values, beliefs, and knowledge when faced with resistance by other white people. For parents of transracial adoptees, this stage may include making sure your community and social circles are diverse and representative of your child’s race, or confronting the racism you see manifest in your family or social group.

Racial identity development is not a linear process, and we often circle back to previous phases or popcorn around. The key is to remain open to transracial adoptee’s experiences, honor or validate their thoughts and feelings, and at the same time, it is crucial that we don’t expect them to teach us about racism. Our learning about racism and understanding white privilege is our responsibility. Consider the following questions for reflection:

To better support transracial adoptees, white family members and friends can take one of the first steps toward combating racism by self-reflecting on our own white identity. This introspection is a continuous process, as it is ever-changing. We can begin to acknowledge our white privilege by noticing and naming whiteness, reflecting on how our ancestors benefited from whiteness, acknowledging the different forms that racism takes on, and identifying where we are at in our white identity development.

For numerous resources on transracial adoption, anti-racism, social justice, and related topics, please visit this page on our website: Transracial Adoption Resources for Adoptees and Families

Posted in Adoption, Transracial Adoption and tagged Brittany, identity, international adoption, transracial, White privilege
← The Many Identities of Me: Coming to Terms with My Identity as a Transracial AdopteeSearch and Reunion — Voices in the Lifelong Journey of Adoption →

View all posts by Brittany Purrington →
Join Our Mailing List
Don't miss out on blog updates and new resources!