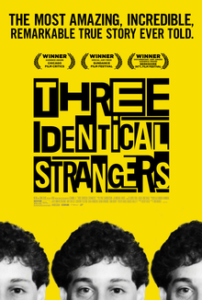 The new documentary, Three Identical Strangers, was initially shown to rave reviews at the 2018 Sundance Film Festival.  BPAR has anticipated this film with interest; it addresses the lasting and far-reaching impact of early adoption decisions with disquieting detail. The film, directed by British filmmaker Tim Wardle, tells the true story of identical triplets, Bobby, David and Eddy, who were separated at birth and placed into three homes of differing socioeconomic backgrounds.  Often when I see a movie, I gauge its impact much later, as I think about it over the days to follow.  Three Identical Strangers has not left my thoughts since I saw it, and I highly recommend it. The story is thought-provoking on so many levels and raises as many questions as it answers.

Bobby, Eddy and David were born in 1961.  At that time, the now defunct Jewish adoption agency, the Louise Wise Adoption Center, in conjunction with prominent psychologist Dr. Peter Neubauer, included the boys in a longitudinal research study. Dr. Neubauer was the director of the Child Development Center which was under the auspices of the Jewish Board of Family and Children’s Services.  The adoption center placed Bobby in an upper-class home, David in a working-class home, and Eddy in a middle-class home.  They did not tell the adoptive parents that the boys had identical siblings who were being placed in other homes.  They did, however, tell them that they would follow the boys’ development via home visits.  A researcher went to the home yearly to videotape and evaluate each child purportedly to track their progress as part of a study of adopted children. The study ended in 1980. Dr. Neubauer had not released any study results at the time of his death in 2008; he bequeathed them to the Yale University archives with the provision that they not be released until 2066, and only then to individuals with written authority from the Jewish board. Interestingly, at the end of the movie, we learn that after this documentary was first shown, one of the triplets was given around 10,000 pages of the study, but it was heavily redacted, and study results and conclusions were omitted.  Indeed, there are still so many unanswered questions, and since we are not privy to the study’s results, we are left wondering about many issues that the film raises.

After watching the movie, I decided to research Dr. Neubauer a bit more: Who was this man and why did he believe that separating these children was ethical? The New York Times states the following in Dr. Neubauer’s 2008 obituary: “Beginning in the 1950s, Dr. Neubauer was frequently quoted in The New York Times and other publications, offering consoling words for parents of troubled children and advocating for sensitivity in dealing with childhood challenges including nursery school and summer camp.”  The obituary fails to mention the twins study.  In 1997, journalist Lawrence Wright published his book Twins and What They Tell Us About Who We Are.  This follows twins from the Neubauer study who also reconnected later in life. In a New York Times book review, the reviewer noted the following: “Neubauer believed at the time that twins posed such a burden to parents, and to themselves in the form of certain developmental hazards, that adopted twins were better off being raised separately, with no knowledge of their twinship… Neubauer also recognized the exceptional research possibilities such a separation offered. Studies of twins reared apart are one of the most powerful tools that scholars have to analyze the relative contributions of heredity and environment to the makeup of individual human natures.”

Fast forward to a 1980 college campus, where two of the triplets are mistaken for each other and soon discover that they have an identical sibling, separated at birth.  A third triplet sees the newspaper reports and is discovered as well.  The documentary starts with this revelation, and it is, of course, fascinating to watch.  These boys look so much alike, and they even have similar mannerisms. It was an age before Facebook and Instagram – the boys became “viral” in the age of newspapers and talk shows.  The triplets formed a quick bond, and in many ways they appeared giddy with the novelty and excitement of getting to know each other and in becoming overnight media sensations.  As the documentary explores the years that follow, however, and as the novelty settles in and life continues, the lasting impact of those early decisions becomes clearer.

In 1961, Dr. Neubauer believed that he had designed an ideal research study that would help resolve the Nature vs. Nurture controversy.  Today, we look back at this research study, and the ramifications of those decisions are both powerful and heartbreaking.  Now 56 years old, when asked for an L.A. Times article about the movie how he feels about what happened, Bobby states, “It’s beyond anger…We’ve been called ‘subjects.’ We’re victims. There’s a big difference. I don’t want to play off like we’re horribly injured people now as adults — we have families, we have children — We’re relatively normal people. But they treated us like lab rats. Nothing more. And we’re human beings.”

Here at Boston Post Adoption Resources, we are dedicated to providing post adoption therapy and resources for all members of the adoption triad – birth parents, adoptive parents and adoptees. We understand that adoption is a lifelong journey and that everyone who has been touched by adoption deserves support throughout their lives.  In so many ways, it is distressing to watch the interviews of these adoptees as they struggle to understand and make sense of the unusual decisions that were made for them at the time of their birth.  We witness an underlying rage and deep sadness that is especially palpable in the more recent interviews as we watch these men try to make sense of their life story.  Today, the adoption community supports telling children as much as they can understand developmentally about their birth family.  Clinicians at BPAR suggest that as the child grows and asks more sophisticated questions, parents give them more developmentally appropriate information.  As all children move into their teenage years, they begin to grapple with identity issues – who am I?  What do I want to do with my life? Adoptees often experience additional layers to these questions and issues: The question “Who am I?” is layered with even more concerns, from “Where did I get my eye color?” to “Why am I good at math?” and even, “Will I have an inherited medical or emotional illness?”  Add to this the developmentally appropriate decisions around applying to college and leaving the home, and identity issues are heightened.  Transitions, especially leaving the home, are an understandably unique challenge for adoptees, who may struggle with deep-seated feelings  around abandonment and loss. Bobby, David and Eddy first met each other during this complicated and vulnerable time in their lives.

2018 is an era of heightened social media and sophisticated tools such as Ancestry.com and 23andMe, through which adoptees can research their birth families.  BPAR receives calls weekly from adoptees and birth families who have recently connected with biological families, sometimes ones they did not even know existed, and are startled by the feelings they encounter. For adoptees, adoptive parents and birth families, this is a time that can feel overwhelming and requires time and support to process. We are able to work closely with these families and help pace the process in a way that will feel safe and supportive.  Watching the whirlwind that was Bobby, David and Eddy’s reunion and early years together is both exciting and heartbreaking at the same time. Without the history of living and growing up together, they did not know how to simultaneously love and argue and resolve their differences; it was as if they started their lives together in the middle of a book rather than at the first chapter.  Shafron says in a recent Newsweek article:  “We didn’t grow up as a family.  At first we had nothing but joy and love. Then the bickering began. We never learned how to argue and then make up.”

Some adoptees struggle with issues of self-worth throughout their lives. They may struggle with feeling “not good enough” as they try and make sense of why their birth parents chose not raise them, as well as feelings of loss and abandonment. Often added to this is a feeling of not having control; they did not make the choice to be adopted after all. The loss of the birth mother can become heightened when an adoptee suddenly realizes that they have lost identical siblings as well.  Three Identical Strangers gives us a glimpse into how unresolved grief, trust issues and a fear of loss and separation might color these siblings’ future relationships.  According to NPR, of the 13 children involved in the Neubauer study, three sets of twins and one set of triplets have discovered their siblings. There are still reportedly four people who do not know that they have an identical twin. As the film ends, we are left wondering about that elusive question of Nature vs. Nurture and of course why Dr. Neubauer decided to keep the results under lock and key until what surely would have been after the deaths of the twins and triplets who were at the core of the study.

At BPAR we strive to help everyone in the adoption triad connect with their own stories and perhaps make sense of their experiences in a new way, wherever they are in their life journey. Our hope is that more services and resources will become available, and certainly mainstream documentaries like Three Identical Strangers have the potential to draw attention to this need.

View all posts by Erica Kramer, MSW →
Join Our Mailing List
Don't miss out on blog updates and new resources!