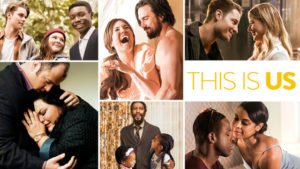 We at BPAR are gearing up for the highly anticipated Season 2 of This Is Us, premiering Tuesday, September 26, 2017 on NBC.

For those unfamiliar with the TV series, This Is Us is a show about the lives of members in a family: a mother and father, triplet children – one of whom is a transracial adoptee – and his birth father. The show weaves between the past and the present, leaving the viewers captivated and engaged with each episode.

When the first season premiered last September, we, along with the rest of the show’s audience, were captivated. This Is Us explores so many real parts of the complex emotional journeys of individuals and the relationships between family members and loved ones.  At BPAR, we were especially interested in the plot line involving Randall, a black child raised in a white family. In Season 1 we followed him through his reunion with his birth father, how it impacted his life with his wife and children, as well as his relationship with his adoptive mother and siblings.

Randall is played by actor Sterling K Brown, who recently won an Emmy for Best Actor in a Drama for his role in the show. Last month in an interview with People/Entertainment Weekly Network he spoke about his role in the show. When asked if he felt the show has impacted transracial families, Brown said, “I’ve had a couple people who have transracially adopted come up to me and say, ‘thank you’ … I think folks just enjoy seeing their story told in a way that’s highlighted for a national audience…You see someone telling your story and you’re like, ‘they get it.’” We couldn’t agree more here at BPAR. Our clients have told us that they feel connected to the show because it brings a story similar to theirs to the mainstream in a positive light.

We believe that adoption is a lifelong journey, and This Is Us portrays this beautifully through Randall’s (and his family’s) experiences. As a child, we see Randall’s identity exploration as he finds other children that look like him at the neighborhood pool. As an adult, we witness Randall grapple with feelings of abandonment and loss. Topics such as identity and loss are so common among people who are adopted, and seeing them displayed nationally on television can be incredibly validating for anyone who also experiences those feelings.

This show provides people an opportunity to start a conversation about all the complexities surrounding adoption, which helps to broaden people’s perspectives. We can’t wait to see what Season 2 has in store!

Katie Gorczyca, MA, Expressive Therapist, is a former clinician at Boston Post Adoption Resources. She began her career with BPAR as an intern.