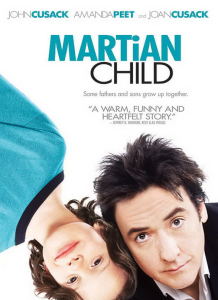 David Gordon is a successful science fiction author whose wife Mary died two years ago. The couple had been planning to adopt their first child, in part because Mary had been adopted. A few years passed before David was contacted because he had been matched with Dennis – a ten-year-old boy living in a group home. He contemplated becoming a widowed father: “I don’t know if I want to bring another kid into this world. But how do you argue with the logic of loving one that’s already here?”

When David met Dennis, he was hiding inside of an Amazon shipping box. He comes to find out that Dennis believes he is from the planet Mars. He hides in the box to escape the sun’s rays. He also wears a homemade weighted belt around him because “earth’s gravity is weak. Mars is constantly pulling me back.” In conversation David questions if Dennis would float away without the belt. When Dennis says yes, David asks if it has ever happened before. “Yes. With another mommy and daddy.”

Dennis agrees to move in with David, and potentially make that his home. What David learns by welcoming Dennis into his family is the underlying trauma that Dennis went through. Dennis was abandoned as a baby and had no one to care for him, or love him like parents do. He never had a family. The idea of David and Dennis being a “forever family” was new to both of them. Contrary to what his sister and social workers had to say about a single man adopting a child, David followed through and stayed by Dennis not only while he adjusted to his new environment, but also reassured Dennis he would never leave when the adoption was finalized.

This film is very powerful. David is an outstanding father to his son who has very peculiar behaviors – believing he is a Martian from Mars, running away, stealing small things, etc. David understands the need to “find the balance between socializing and letting him be who he is.” – an important part of parenting. Dennis needs to feel loved. His behaviors stem from loss and the lack of family connection in his life. At the end of this film David lets Dennis know how much love he has for his son. “You’re extraordinary, big-hearted, the easiest kid in the world to love. I think you love me, too. Dennis, you’re my son. You’re my own, forever, and I will never leave you.”

MARTiAN Child, directed by Menno Meyjes, explores adoption from within foster care, and what it takes to be a family. We all need one thing in life – Love; to feel loved and accepted for whom you are. “Sometimes we forget that children have just arrived on the earth. They are a little like aliens coming into being as bundles of energy and pure potential, here on some kind of exploratory mission and they are just trying to learn what it means to be human.”