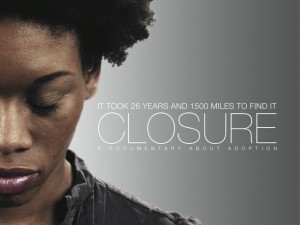 The documentary film ‘Closure’ follows Angela, a trans-racial adult adoptee who is in search for her birth family in order to find out her identity. Her husband, Bryan, films the entire two year journey and captures key defining moments in Angela’s life – reunion with her birth father who never knew she existed, initial rejection by her birth mother and later a reunion with her which eventually bring what she hoped for most – closure. It is a very powerful and uplifting film, which encompasses all perspectives of the adoption triad.

Angela was adopted by a Caucasian couple and was raised in a predominantly white community. Her adoptive parents adopted seven other children all with special needs and from different racial and ethnic backgrounds. Angela’s experience growing up in such a diverse family contributed to a confused sense of identity and motivated her to find answers about her birth family. The film touches upon how Angela’s search affects her adoptive family and the questions and feelings that arise from her parents and siblings.

The film captures the notion of family secrets and how deeply they can negatively impact relationships.  When Angel meets her birth father, his extended family and her birth mothers family none of them knew she existed. Her initial meeting with her birth mother was sudden, unplanned and met with rejection. After some time she is able to contact her in a more structured and planned way which eventually leads to a reunion. Closure highlights the importance of having supports throughout the reunion process as well as being respectful of every individual’s feelings. Angela’s entire adoptive family supports her through her process despite their own feelings about her search. At the end of the film Angel talks about how she had envisioned going through this journey alone but realized that she couldn’t have done it without the support of her family.

Overall this was an uplifting story of adoption and reunion. Angela is able to get answers she was looking for and finally feels a connected sense of identity.  A great film for anyone interested in learning about adoption, and any member of the adoption triad looking for a positive story about adoption! For more information or to find out how to view the film, see the link below.

Posted in Adoption, Movie & TV Reviews, Parenting, Reunions, Transracial Adoption and tagged communication, Kelly, transracial
← The Importance of Play — At Any AgeMovie Review: Adopted: For The Life of Me, by Jean Strauss →