Trigger warning: This content includes potentially distressing topics such as suicide and abuse. Readers who may be sensitive to this material, please take note. We encourage you to care for your safety and well being.

If you or someone you know may be considering suicide, contact the 988 Suicide & Crisis Lifeline by dialing 9-8-8, or the Crisis Text Line by texting HOME to 741741. 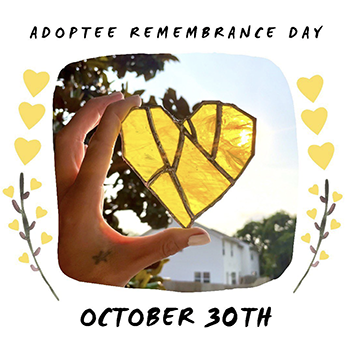 Too often the emphasis of the adoption world is on the benefits of adoption: the hope, joy, and fairy tale endings. Often the voices of adoptees, those who hold the least amount of power in the adoption triad, are drowned out and dismissed, and their trauma, grief, and loss are ignored.

There is an incorrect assumption held by many that all adoptees fare well and everything works out positively, when in fact many adoptees are left alone and unsupported. Adoptee Remembrance Day, created by Adoptees Connect founder Pamela Karanova, is commemorated annually on October 30 to put a pause before National Adoption Awareness Month and focus on adoptee loss. It’s a day to acknowledge adoptees who have died by suicide, crimes against adoptees by adoptive parents, adoptees who are without citizenship, adoptees who have been rehomed or had their adoptions disrupted, and adoptees with limited or no access to their genetic information and families.

Adoption loss and suicide remain very invisible and unspoken topics, so below are ways to raise awareness and ideas for action:

Wear yellow  to honor those adoptees we have lost to suicide and promote education about adoption trauma. In a climate of fear around adoptee loss, and suicide in general, wearing yellow can start the conversation about these issues and allow and encourage everyone to participate in suicide prevention at their own comfort level.

Educate yourself on adoption trauma. Even the healthiest, safest, and most loving adoptions begin with loss. Understand that separation from a parent, even at birth, meets the definition of a traumatic event. Everything the child had been used to, while in utero and beyond, is gone, and this early stress can compromise brain development. Trauma-induced changes to the brain can lead to emotional, behavioral, and learning challenges, especially in the absence of trauma-informed parenting and interventions. This trauma experience becomes worse when there are additional adoption traumatic events such as when others minimize the adoptee’s grief and loss, the challenges of being transracially adopted by adoptive parents of a different race or ethnic group, an absence of information about birth family, experiencing abuse and neglect by adoptive families, being a late discovery adoptee (not learning about one’s adoption until the adoptee is an adult), and being rehomed or “un-adopted” (the practice of adopting children and then sending them back to an adoption agency or using Facebook to find them a new home when they are no longer wanted). Recognize that relinquishment and adoption trauma of all kinds can have an impact on an adoptee’s mental health throughout the lifespan. For further information, check BPAR’s resources here.

Reach out to adoptee loved ones. If you love and care for someone who is adopted, listen to their lived experiences without judgment, interpreting, or evaluating. Listening to adoptees, without jumping in to try to fix anything to “make it better” or minimizing their experiences, is one of the best ways to make them feel heard and supported. Hold space for them and provide validation. Understand that they are the experts of their experience.

Creatively express how you’ve been advocating for change in adoption policies and practices through art, writing, or music. These self-expressions can also be dedicated to the remembrance of the adoptees who didn’t survive adoption. To further raise awareness, use the hashtag #adopteeremembranceday to share your work on social media.

Observe a moment of silence. Some research shows that adoptees are four times more likely to attempt suicide than non-adoptees. Honor those lost to suicide by pausing for four minutes.

Encourage help-seeking by spreading the word about crisis services, mental health support, and adoption-competent therapy. While friends and family may provide enough support for many adoptees, others may require additional assistance and/or peer connections. If an adoptee has opened up to you about how they’re feeling, you can begin to introduce resources such as 988, the 24/7 Suicide & Crisis Lifeline, and the Crisis Text Line for those who may need immediate help, and start discussing the possibilty of speaking with a professional and joining an adoptee-centric peer support group. Remember to follow up after someone has sought out these resources to ensure they are doing better and so they know that they will have your continued support.

View all posts by Angela Smith →
Join Our Mailing List
Don't miss out on blog updates and new resources!