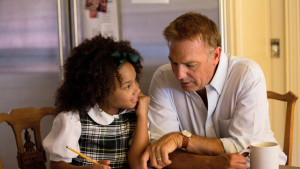 Black or White, written and directed by Mike Binder, shares with the world a young adoptees’ experience of divided loyalty, race and family. Eloise is a young biracial girl, whose mother died after giving birth when she was seventeen. Since her mother’s passing, Eloise has been living with her maternal grandparents, Eliot and Carol. She has been raised in an upper class, Caucasian neighborhood, studying at a small private school. At the beginning of the film Carol dies in a sudden car accident, leaving Elliot as the sole caretaker to Eloise. After this sudden tragedy, Eloise’s paternal grandmother, Rowena, worries that Elliot is no longer capable of raising Eloise on his own, and decides to seek custody of Eloise. Eloise’s father, Reggie, became addicted to drugs and left Eloise in the hospital – since this time, Elliot has had concerns with that side of the family.

This film focuses on the custody battle between Elliot and Rowena: two grandparents struggling to find kindness and love for each other and for their grandchild. We see the worst in both of them – addiction, stereotyping and the impact loss had on them. Both Elliot and Rowena recognize their own flaws and their unfortunate behavior of putting their own needs and emotions before the needs of Eloise. Throughout the hateful words, unkind acts, and false accusations planned, love was finally found.

Black or White addresses the topic of divided loyalty, which comes up so often for adoptees. No one should have to choose between his or her family. The push and pull feeling is overwhelming for a child. Eloise shared that she wanted relationships with all of her family. Children form their identities based on their parents and the information they are given. Identity development is such an important part of who we are, and divided loyalties have a negative impact on the process.

Black or White – why decided when you can live happily and have them both?

If you only take away one thing from this blog remember this: You can never have too much love!