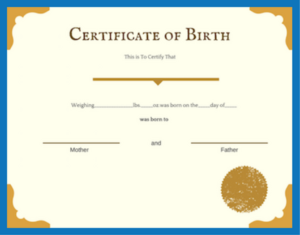 I like to believe I was one of those first in line to get my original birth certificate.  But why did I want it?  After all, I had met both my birth parents when I was in my early twenties, so I knew their names and I knew where I was born. I no longer needed the certificate to provide me with a link to my history or to fill a void left by missing information.

I can honestly say that I wanted my original birth certificate for no other reason than because it was mine to have.  And because I already had all the information I could want, I was not expecting to learn anything new when I received it in the mail.  But I was mistaken.

On my birth certificate, the boxes are numbered similarly to the way they are on a W-2, with each box containing information such as my name, my birth mother’s name, time and date of birth, attending dr., hospital, etc.  Boxes 12-27 contain medical information, such as my weight, how many pre-natal visits my birthmother had, the race of my birthparents, and years of high school they each completed.  But then there’s box 20: Legitimate. Yes or No are the options and “No” is checked off.  I wasn’t legitimate.

In legal terms, I wasn’t legitimate because my birthparents were not married. And in researching this designation further, I discovered that some birth certificates from my era actually have the term “bastard” on them.  I can only imagine what that must feel like.  These are both, of course, somewhat outmoded designations in today’s times, because it is widely accepted that both birthparents bear a responsibility to their child regardless of their marital status.  But the label “not legitimate” stirred up some unexpected feelings in me.  Legitimate by definition means lawful or genuine; of the “normal or regular kind” and I’m law-abiding, genuine, and for the most part, “normal”.  I wanted to write back to the Office of Vital Statistics to let them know there was a mistake on my birth certificate, because I am, and always have been, legitimate.

I was angry at first, at those people who labeled me without knowing me.  But then I realized that the reason I knew all of this in the first place was because groups of people lobbied tirelessly and relentlessly to open those birth records, and that represents progress.  And there really has been so much progress since I was mislabeled all those years ago.  For example, International and transracial adoption have created such beautiful blended families that adoption cannot be kept a secret any longer.  The expectation today that both parents bear responsibility for a child has eliminated negative labels.  Books about being adopted and what that may feel like from a child’s perspective mean no child ever has to feel alone or unheard.  And talking honestly with one another about the challenges birthparents, adoptive parents, and their children face is the most positive progress of all.

I used to be illegitimate, but I’m not anymore.  And no one ever has to be again.

Written by Lisa Greggo, Guest Blogger
Lisa Greggo’s work has appeared in The Boston Globe, Let the Bucket Down, and other places. She is currently at work on a book-length memoir about her experience with foster care, adoption, and search and reunion. She can be reached at lisagreggo@gmail.com